To enhance rail reliability and to provide better journeys for millions of commuters who travel with SMRT every day, we embarked on the biggest rail transformation programme since rail operations began in Singapore in 1987. The sleeper replacement project on the North-South and East-West Lines (NSEWL) began in 2013, where 188,000 ageing timber sleepers were to be replaced with concrete sleepers.

A joint team comprising SMRT and the Land Transport Authority (LTA) was formed in June 2012 to look into reducing disruptions and increasing the reliability of the NSEWL. Other rail transformation projects, including re-signalling and third rail replacement programmes were carried out concurrently. 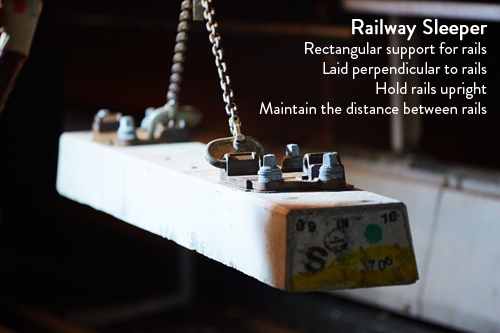 All rail renewal and maintenance works are carried out between 1.30 AM and 4.30 AM, after the last trains arrived at the depots, and before the first trains depart the depots for the start of service. Actual work hours are much more limited because of the time needed to transport machinery to the work site.

Starting with four road-rail vehicles (RRV) in 2013, before increasing the fleet to 14 in early 2016, these vehicles were used to mechanise the replacement of sleepers, a process which was initially done manually. The use of RRVs helped to accelerate the sleeper replacement schedule. In addition, fixed gantry cranes were brought in in early 2016. They were located at two ends of the EWL – at Pasir Ris overrun, and between Chinese Garden and Lakeside stations.

The gantry cranes, which were 20 metres in height and weighed 74 tonnes, were used to hoist the RRVs and concrete sleepers from the ground on to the tracks. They allowed the RRVs to deploy more quickly to the work front and thus allowing more sleepers to be replaced each night. Six Temporary Staging Areas (TSAs) were located at Kallang, Redhill, Chinese Garden, Pasir Ris, Changi, and Ulu Pandan to act as holding bays for RRVs and other heavy machinery. 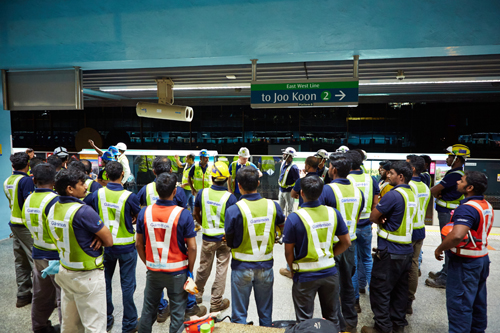 Roger Lim, Project Director, Track and Infrastructure; and concurrently Vice President, Circle Line and Bukit Panjang LRT Projects, said “As we take apart parts of the track each night, we need to be very judicious on safety and quality checks when we put back everything within the three-hour engineering window. We have to make sure all systems are in order and ready for service each morning.

We had to look into the inter-operability within and across other work teams. Managing close to 1,000 personnel with 14 RRVs, two tamping machines and numerous mechanical handling equipment, the project team members must be cognisant of the various activities in the five work fronts. We had centralised planning to optimise the resources, while allowing decentralised execution for localised care and safety measures at the respective workfronts. Steely perseverance and steady pace helped us to work productively yet safely on the viaducts every night.” 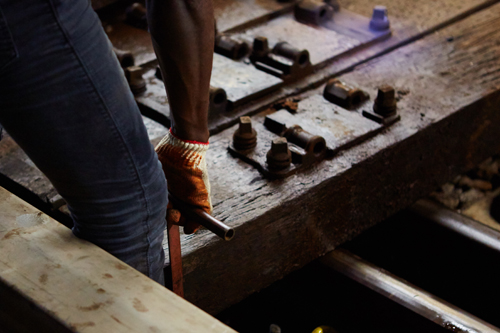 Thank You for Your Understanding

In the last three years, measures such as speed restrictions and shorter operating hours were imposed. With the use of heavy machinery, moving of extremely heavy equipment and materials, and works such as welding and tamping, it was inevitable that noise would be generated. Our teams took all necessary steps to minimise noise and light pollution in the early hours of the morning- including using monitoring devices and barriers to keep noise levels to a minimum, and keeping night lights pointed away from residential homes.

There was an unmistakeable sense of excitement and pride at Clementi MRT Station at 1AM. Representatives from SMRT, LTA and our contractors were in high spirits as the RRV appeared in sight for the final time. They watched the last wooden sleeper on the westbound track was removed. The final concrete sleeper was laid on 20 December 2016 – a full three years ahead of its original target of 2019.

Coordinating Minister for Infrastructure and Minister for Transport Khaw Boon Wan officiated the completion of the sleeper replacement programme on 20 January 2017. Accompanied by President and Group CEO Desmond Kuek, the minister signed a commemorative plaque to be installed at Clementi MRT Station, where the last batch of wooden sleepers were replaced. 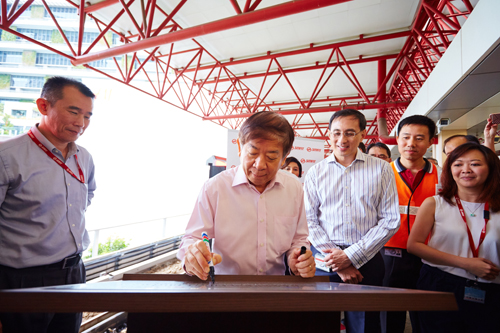 The sleeper replacement programme is the first of many milestones to come. As speed restrictions are lifted, our commuters can enjoy safer, smoother and faster rides on our network. We also look forward to the completion of our re-signalling and third rail replacement projects which will improve the journey experience for all commuters. 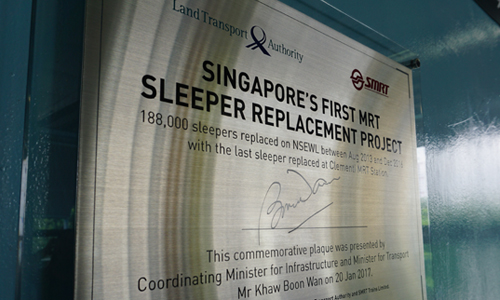