You are here: Home1 / Passenger Service

As Singapore’s iconic train operator, we carry more than two million passengers on our train network daily. Throughout our 30 years of service, we have connected communities and transformed the way people live, work and play.

As we embark on our next leg, your journey matters. We look forward to the boundless opportunities to continue serving you and delivering safe and reliable travel experiences. 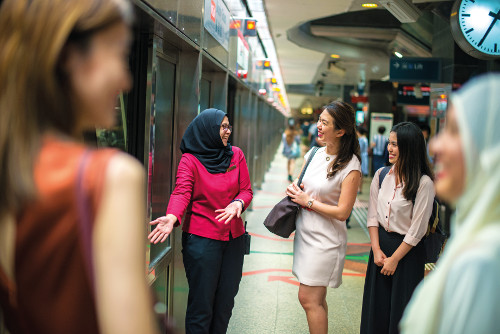 Firstly, we thank you for your support! With 162 compliments to every complaint received, your feedback goes a long way in encouraging SMRT staff. Always there to help you, our station managers and ambassadors are ever-willing to go the extra mile to make you feel safe and comfortable on our trains.

Feel free to tap on the many commuter service touchpoints we have across our stations, passenger service centres, platforms and trains to make your commute with us more comfortable. 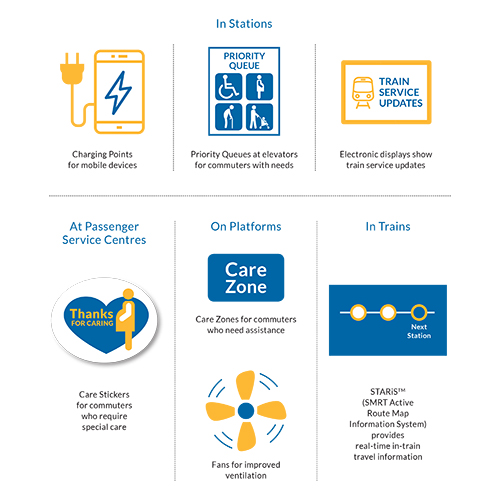 Stay in touch with us through our digital platforms. Our two-way communication channels provide you with real time travel updates and a platform to give us feedback too. 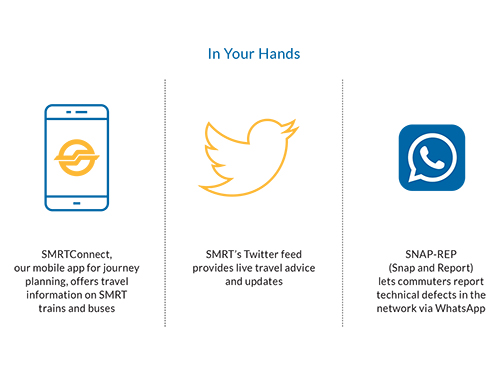 At SMRT, we strive to create and provide a safe, inclusive and accessible environment for all our commuters. Here are just some initiatives we have implemented. 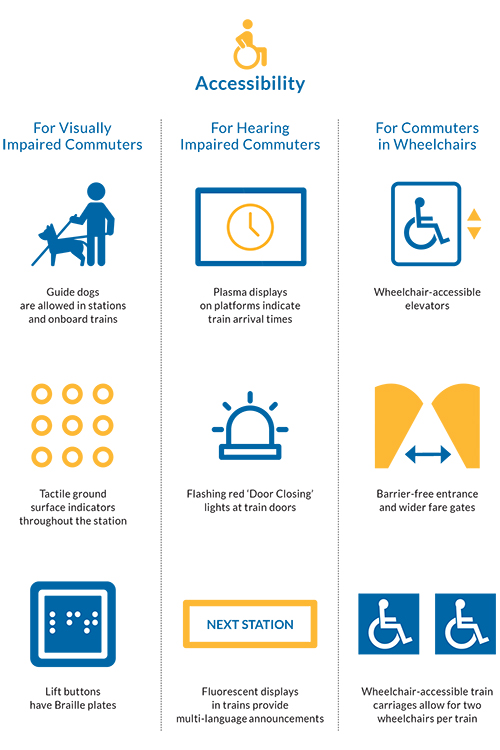 SMRT Trains will continue to bring you greater convenience and comfort.

Engineers from SMRT, LTA and Thales, the supplier of the signalling system, have been monitoring the performance of the signalling system closely since NSL trains began serving passengers using the new signalling system in late March. Engineers continue to rectify teething issues. These include achieving higher accuracy of train and station door alignment, better coordination between closure of train and station doors, familiarising train captains with operating the new system in inclement weather and allowing maintenance teams to troubleshoot and rectify faults with the new system.

The weekday system-level performance checks will allow the system engineers to further fine-tune and improve the operational performance of the system. These checks on the NSL – Singapore’s oldest MRT line – will furnish engineers and maintenance staff with data on the performance of the new signalling system, with the number of trains deployed on the NSL and the interval between each train varying from peak and non-peak hours. Such data will be assessed closely as part of rigorous checks before the system is declared fully capable of eventually supporting train operations at intervals of as short as 100 seconds between each train.

During the weekday system checks, the new signalling system may continue to encounter some glitches as it settles in to full-load operations. Commuters on the NSL could experience instances of train and platform doors not opening or closing promptly, trains held at stations slightly longer than usual, or trains stopping momentarily between stations. In earlier trials which took place during the last hour of passenger service, and during Sunday trials, the safety system stopped trains momentarily so that engineering staff could address signal glitches. The new Communications-Based Train Control signalling system is designed with this safety feature which ensures trains will be kept at a proper distance from one another at all times. Such situations are not safety critical and SMRT, LTA and Thales will have more engineers on standby to respond quickly to situations that may arise. More station staff will also be on hand to assist commuters.

These weekday system checks have been planned to commence during the June holidays to minimise commuter inconvenience. However, those travelling on the NSL are still advised to cater for additional travelling time.

Mr Alvin Kek, SMRT Senior Vice President for Rail Operations (NSEWL), said: “While we look forward to operating trains on the new signalling system, the all-day performance checks are part and parcel of working out teething issues that may arise when a new signalling system is introduced to a train network. Our engineers, operations controllers, and trains and stations operations staff have been working with LTA and Thales for the past two months to ensure that the checks on the new signalling system are carried out under close monitoring, and to ensure that all incidents are quickly resolved. We continue to ask for commuters’ patience and cooperation as we work round the clock to settle the system in as quickly as possible.”

Commuters can refer to SMRT’s Facebook and Twitter feed, as well as the SMRT Connect and MyTransport travel apps for service updates. 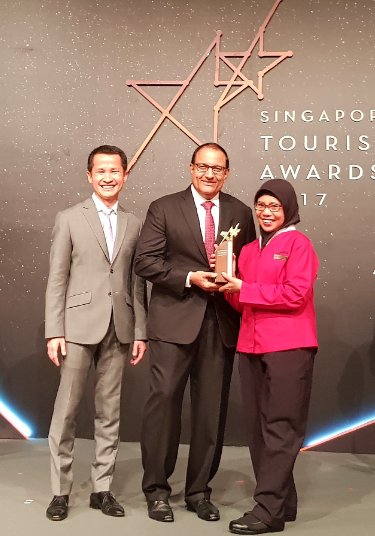 Katijah has been with SMRT Trains for 32 years. “I love to interact with people. This job allows me to meet people from all walks of life. Through conversations with my passengers, I get to learn something more about them. After some time, it feels like I am meeting up with old friends. We even talk about where to find good food and how each other’s family is doing.” Now stationed at Paya Lebar, she is responsible for the station’s daily operations. She shared that she always tells herself to perform her job to the best of her ability. “As long as my passengers are happy, I am happy.”

She said she is motivated by people featured in the media who had either won service-related awards or had their extraordinary acts published. “These stories help me to identify the different approach that may help me in assisting my passengers in a different way.” When asked to share advice with new joiners, she said it was important to be calm and empathetic. “Always listen attentively to passengers, in order to come up with the right solution to help them. Be objective instead of being too emotional as this will affect decision making. Be open-minded and do not be afraid of challenges.”

Katijah added that she went through a difficult period when her son passed away due to an illness last year. “I hope that this award will motivate and inspire my two other children. No matter how difficult the situation is, nothing is impossible if we put our hearts into it.” 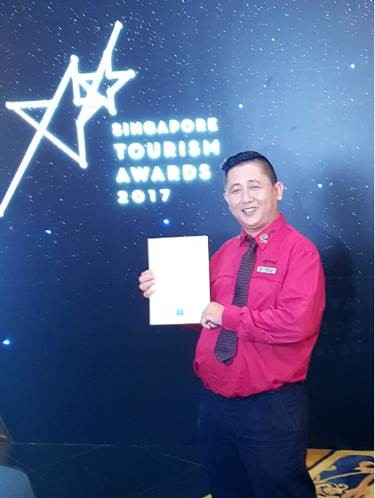 Bus Captain Chia Boon Siong was a finalist in the same category. Having been in the industry for four years, he believes that it is important to treat his passengers with patience and care. He pays special attention to senior citizens, and ensures they board and alight safely, and that elderly commuters are seated before the bus moves off. He once helped an elderly man and wheelchair-bound wife board the bus on a rainy day. Although he was thoroughly drenched in the process, he still continued his work in a most cheerful manner.

A familiar figure to passengers who take Service 858, Boon Siong says that he enjoys helping others, “I always want to bring a smile to every person who journeys with me. Though it seems like a small thing, it makes me very happy.” He has taken the initiative to learn the names and general information of key landmarks along the route so that he can respond effectively to commuter queries. 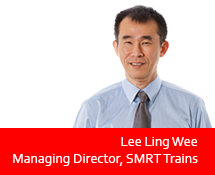 SMRT’s engineering team tracks closely the performance of all rail lines because the data collated allows the team to know which areas of the rail network need more attention.

Such data is shared with the public too. SMRT has been reporting quarterly statistics on the performance of the North-South and East-West Lines (NSEWL) on SMRT’s corporate website. Doing so allows commuters to keep track of key performance indicators for our rail system, such as delays of more than five minutes, disruptions of more than 30 minutes and the train withdrawal rate. 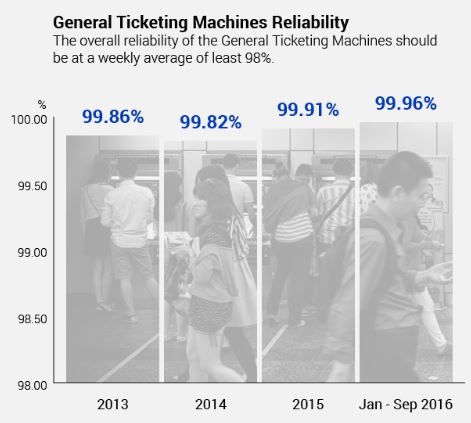 We have recently included data on the reliability of MRT station assets used by commuters, such as escalators, lifts and fare gates. We will continue to publish key service performance indicators on a regular basis so that you can follow our journey in improving reliability on our network.

The re-sleepering, re-signalling, third-rail replacement and power network improvement project will contribute to better reliability on the NSEWL – Singapore’s longest, oldest and most heavily-used rail lines.

The mean kilometre between failure (MBKF) rate will improve, thanks to stepped up our maintenance efforts. Furthermore, our multi-year, multi-project renewal efforts for the NSEWL are on track.

While we acknowledge that the improvement in NSEWL service reliability may not seem to be significant in the first 10 months of 2016, we are quietly confident it will demonstrate clear improvements in the coming years. The better MKBF numbers will translate to better journeys for commuters with trains that run more reliably, and shorter waiting times as more trains are deployed on the NSEWL. 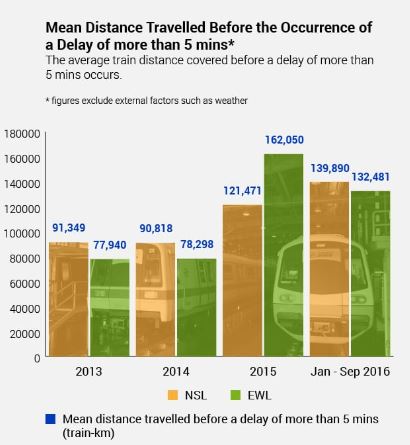 How MKBF will be improved

We have been tracking the sources of our service delays over the past three years and classifying them into categories such as third-rail, signalling, traction power and various types of train-related faults. For each category, we have a series of initiatives in place to address these faults in the immediate, medium and long term.

Improvements in MKBF rate will be achieved as we complete each of these initiatives. For example, we had a number of third-rail-related incidents in the first 10 months of the year that resulted in planned service delays. These are delays of not more than 10 minutes caused by engineering work that the engineers needed to carry out during traffic hours whenever sensors installed on selected passengers trains pick up defects that have the potential of causing more than 30 minutes delays. As part of our short term improvement initiatives, the use of these sensors allow us to identify an emerging issue and nip it in the bud before it caused a longer delay and inconvenienced commuters even more. With the completion of third-rail replacement by March 2017, as part of our long term improvement initiatives, we expect that such incidents will be significantly reduced.

As of November 2016, 33% of delays lasting more than five minutes were signal-related. We expect these to reduce significantly after we successfully migrate our ageing signalling system to the new Communication-Based Train Control (CBTC) system. The CBTC system has a higher level of redundancies. The new signalling system will be activated on the NSL in 2017 and we are working hard to complete the EWL by end-2018.

We have intensified our efforts to renew the equipment that provides traction power to the network. There are also similar fleet-wide renewal of components to address propulsion, door and brake systems that constitute 90% of train-related delays. 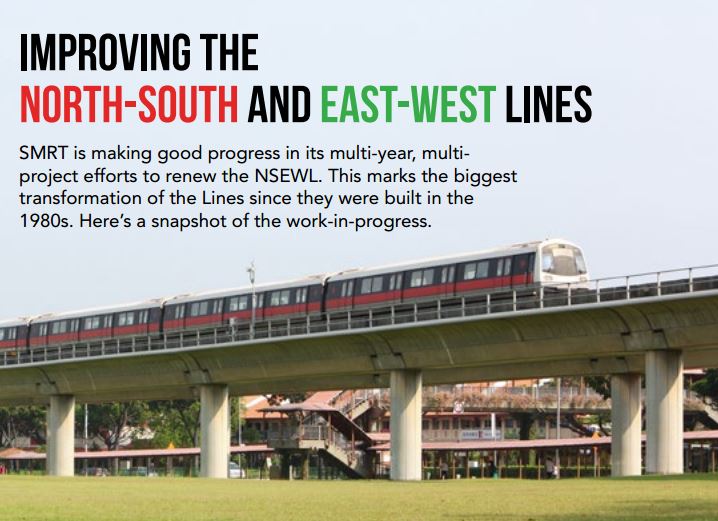 These efforts take several years to complete because of the length of the NSEWL, and the size of the fleet. As we serve commuters nearly 20 hours a day, and 365 days a year, we have limited time to carry out renewal and maintenance works. For example, there are 188,000 30-year-old timber sleepers on NSEWL to be replaced. With 141 six-car trains and 24 doors on each train, there are 3,384 train doors for us to work on. Nonetheless, with a laser-sharp focus and a never-give-up determination to catch up with our counterparts in Hong Kong and Taipei, we believe that there is only one direction for NSEWL rail service reliability to go in the coming years: Up.

Commuters may wish to refer to Your Journey Matters – most recently updated in August 2016 and also available on our website– for a comprehensive primer on SMRT’s efforts to renew and improve the NSEWL. 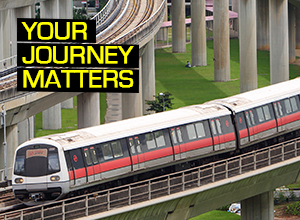 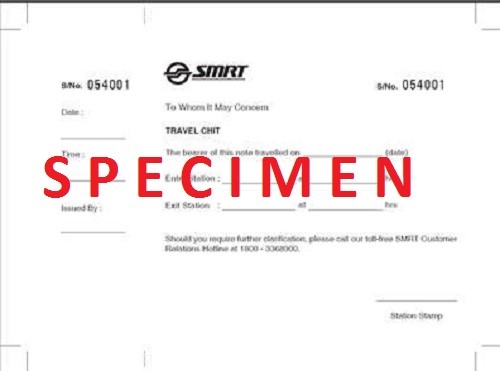 Some of you might have come across an article in The Straits Times today relating to the Circle Line service delays yesterday morning. A commuter shared in the article that SMRT should support commuters with breakdown slips which they can show their employers. We would like to share that we do provide excuse chits, as proof that commuters were delayed because train services were affected. These slips are readily available at our Passenger Service Centres. In the event that you need one, please approach our station staff.
http://blog.smrt.com.sg/wp-content/uploads/excusechitspecimen.jpg 371 500 SMRT Editors http://blog.smrt.com.sg/wp-content/uploads/SMRT-Trains-White.png SMRT Editors2016-09-22 17:19:282020-11-12 10:44:54Excuse Chits
Scroll to top