Your Journey Matters – Edition 2 was published in October 2016 to update commuters on SMRT’s rail tranformation efforts to improve and renew the North-South and East-West Lines (NSEWL)- Singapore’s oldest, longest and most heavily used MRT lines.

As a safety feature, a train that has pulled into a station cannot depart if any of the 24 screen doors are detected as opened. Occasionally, this occurs as a false positive but there are times when the mechanisms inside the doors are faulty, resulting in the doors not closing tightly. 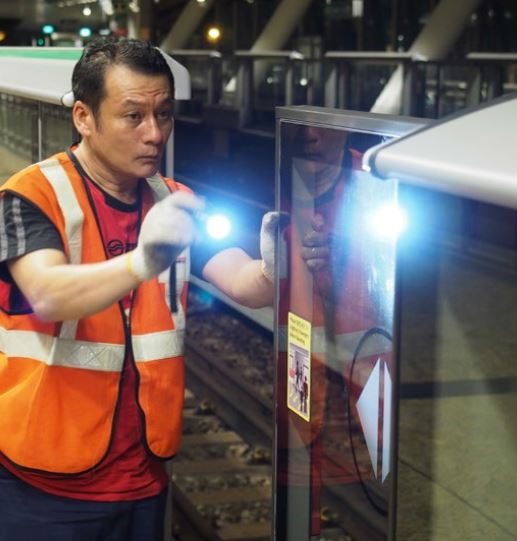 Each night, maintenance teams are dispatched across the island to carry out maintenance works on the screen doors. A typical work night involves checking all 24 screen doors on one side of the platform of the station, replacing worn out parts such as the rubber nose or guard, as well as cleaning and removing debris that may affect the smooth operation of the doors. The team also checks the emergency release lever, located on the train-facing side of the door to ensure that they work. The team will also test the simultaneous opening and shutting of all the doors and finally, when train service commences, the team will observe how the doors interact with incoming trains. This is known as preventive maintenance and all works are done from the platform.

Corrective maintenance on faulty doors will take longer and will require the team to access the track as works have to be done on the train-facing side of the doors. This will require close coordination with the Operations Control Centre to ensure a safe working environment for the team. Corrective maintenance for the HHPSD can be backbreaking work as the whole door has to be dismantled in order to gain access to the components that require fixing.

Concurrently, a project to replace ageing parts in all 816 pneumatic doors is underway. The pneumatic doors are almost 30 years old and ageing parts, like the actuator, are being replaced to improve its reliability. The project started in 2015 and is expected to complete in early 2017. A pre-emptive renewal project has started on the newer electrical HHPSD. Parts like the rollers and belts will be replaced ahead of the recommended end-of-life date to ensure smooth operations

Eye on the future: Options for replacing or renewing the BPLRT system
Scroll to top