Singapore’s MRT network consists of five different lines and has a total of 118 stations in operation. SMRT operates the North-South Line (NSL), East-West Line (EWL) and Circle Line (CCL). The other lines that complete the network are the North-East Line (NEL) and the latest addition, the Downtown Line (DTL).

In 2015, SMRT had a total of nine service disruptions that lasted more than 30 minutes across its MRT network distance of 129.4km, an average of 0.0696 disruptions per km.

Our observations of the disruption statistics of the MRT network notwithstanding, we continue with our efforts to improve overall rail reliability and we are committed to reducing the total number of disruptions.

What SMRT is doing about longer disruptions and power-related issues?

Of the seven NSL and EWL disruptions that lasted more than 30 minutes in 2015, more than half (53%) were traced to power-related issues. The rest were caused by train faults and signal faults. Our efforts to address these faults include the progressive upgrade of older trains and upgrading the signalling system.

In view of the higher passenger carrying capacity that will soon be made possible by the upgrading of the signalling system and the introduction of more new trains in the next two years, the upgrade and renewal of the Power Sub Stations on the NSL and EWL network has been made even more urgent. We have started upgrading and renewing our power network since early 2015. These sub station upgrades will help address the cause of power delays lasting more than 30 minutes when the work is completed by the end of 2018.

The Third Rail System which supplies power to the trains is currently being upgraded to an improved design, which will increase its robustness and maintainability. We began these upgrading works in 2015. We are working on replacing the entire Third Rail system on the approximately 200-km track length (in both directions) of the NSL and EWL by March 2017. As of 12 April 2016, about 27% on the EWL and 6% on the NSL have been upgraded. 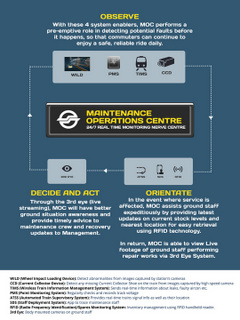 As part of joint efforts to address power-related faults, SMRT and LTA have also consulted experts to improve the resilience of the electricity lines that provide power to MRT trains and stations. (Please click to view the “Independent Advisory Panel completes review of rail power supply system” press release from LTA). SMRT will work closely with LTA to implement these design improvements as part of the renewal programme for the NSL and EWL power system.

Against this backdrop of upgrades, renewal and enhancements to the third rail system and power sub stations, it’s important that we also focus on condition monitoring and predictive maintenance technologies. When fully implemented, our engineers at the Maintenance Operation Centre will be able to leverage on this capability to monitor, predict and pre-empt faults, and attend to them quickly when they do happen.