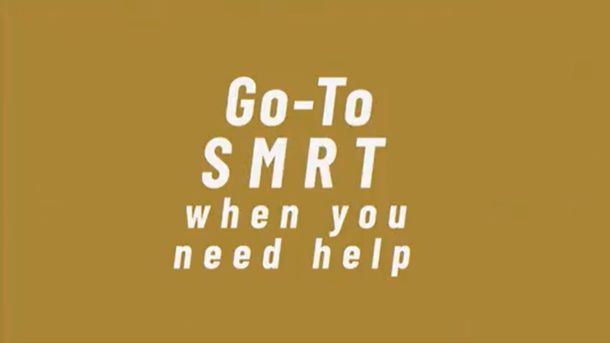 SMRT is honoured and humbled to share that its efforts to serve commuters better have now been internationally recognised.

The Singapore-based public transport operator was named winner of the Marketing Campaign category at the 6th International Association of Public Transport (UITP) Awards 2021 for its “Go-To SMRT” initiative whereby its commuter services and facilities were enhanced to better serve the community.

Under Go-To SMRT, members of the public are encouraged to embrace SMRT-operated transport nodes as the first place they turn to for their common needs such as wayfinding, first aid, dementia Go-To Points (GTP), locating missing children or the elderly that may help in their commutes in the public transport network.

Others nominated for the marketing campaign category were public transport firm Société des Transports Intercommunaux de Bruxelles (SITB) which operates metro, tram and bus lines in the Belgian capital Brussels, and Transports Publics Genevois which runs most of the public transport system in the Geneva district of Switzerland.

The ceremony for the prestigious UITP Awards was held during the MENA Transport Congress and Exhibition in Dubai on 6 Feb 2022.

A total of 320 projects from 28 finalists contested for awards in 8 categories, including for climate and health, diversity and inclusion, and operational & technological excellence.

Held biennially, the UITP Awards is a key date on the annual calendar of public transport industries. According to the UITP, the Awards showcase the most ambitious and innovative projects in cities and regions around the world. For the marketing campaign category, UITP said they look for “creative, original and result-oriented” projects which “make a positive impact on the perception of public transport while reinforcing customer trust in the services provided. It can be a stand-alone campaign, or as part of a wider one that is aligned with the overall strategy and objectives of the organisation.

Launched in April 2021, Go-To SMRT features a unique “Scan & Go-To” QR code which is like a digital concierge service for commuters to easily access useful travel information. It includes Go-To Maps featuring frequently-asked-for amenities surrounding the stations, train and bus timings, and alternative travel information. Facilities such as first aid rooms and WeCare rooms have been refreshed to make them more welcoming and comfortable.

Scenario-based training has also been included to the training curriculum for SMRT’s frontline staff at MRT stations and bus interchanges so that they can confidently and competently handle a variety of situations more commonly encountered within the network.

The training is provided by partner organisations such as the Agency for Integrated Care (AIC), Singapore Association of the Visually Handicapped, the Alzheimer’s Disease Association, Guide Dogs Singapore Ltd (GDS) and the Handicaps Welfare Association (HWA).

The Go-To initiative complements SMRT-run train stations and bus interchanges listed as Dementia Go-To Points (GTP) by the Agency for Integrated Care as part of a collaboration between SMRT and AIC under the Dementia-Friendly Singapore initiative.

GTPs are touch points within the community that serve as resource centres to provide information and useful resources on dementia and link those who need help with relevant dementia-related services. It also serves as a ‘safe return’ point where members of the public can bring persons living with dementia who may appear lost for help. Trained SMRT staff will be able to assist in helping to contact their next-of-kin.

While a nod to SMRT’s efforts, the UITP award is also another reminder that providing safe, reliable and comfortable journeys on SMRT’s public transport network remains the company’s top priority.

As SMRT Group CEO Mr Neo Kian Hong aptly summed up when the Go-To SMRT initiative was launched in April 2021, “Go-To SMRT is a key part of our WeCare service ethos, which seeks to care for everyone we meet and serve.”