If old assets need to be fixed, then new assets are all good? Not quite, going by reports of disruptions on brand new MRT lines with “glitches” and new trains that have teething problems. We spoke to the Circle Line team to learn about the work involved in testing new CCL trains.

Just after 11am on 3 March, a series of tweets from SMRT advising Circle Line commuters of a longer journey indicated something amiss.

The extra travelling time was caused by a propulsion fault on a new CCL train at Nicoll Highway station. To clear the faulty train from the track so other trains could pass, the CCL team pushed the three-car train out of the way using another train. This procedure, known as a six-car pushout, resulted in a tailback along the line. This added extra minutes to the journey of many CCL commuters – for which we are sorry.

This incident involving a new train highlights how manufacturing faults can inconvenience commuters. Detecting such faults before a new train goes into service demands a stringent battery of tests. 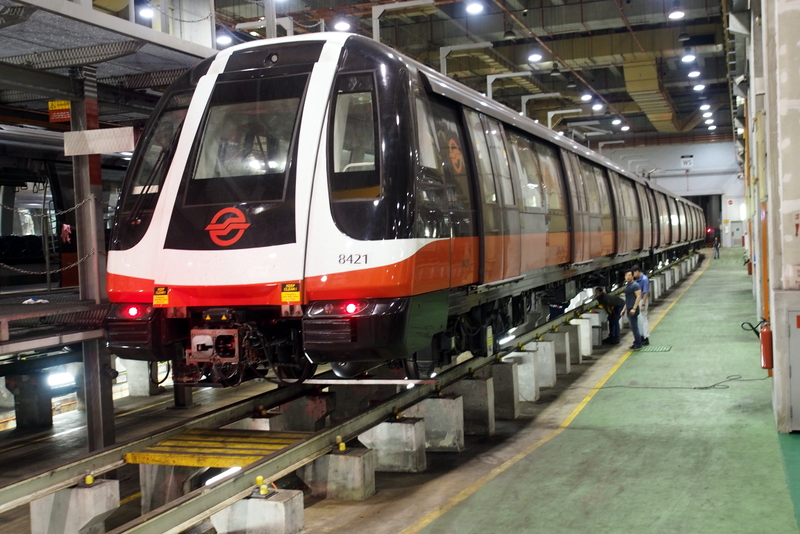 By the time a passenger steps aboard a new Circle Line MRT train, that new train would have clocked at least 1,000km of test runs – equivalent to 28 times round the Circle Line – without passengers.

The trials by engineering staff from SMRT, the LTA and the train’s manufacturer, Alstom, are a necessary and important part of the series of trials that all new MRT trains have to undergo before these trains welcome their first passengers. Safety is never compromised at any point during the pre-service trials and new trains are closely monitored even after they pass the trials to ensure a safe ride for all passengers.

All new trains begin their SMRT journey at Kim Chuan Depot (KCD), the world’s largest underground train depot. From the time they enter the depot, these trains will not see sunlight again while they are on the CCL network. This is because the CCL network is completely below ground.

At the KCD Rolling Stock Workshop, several storeys underground, engineering staff will inspect the new MRT train and carry out static trials. As its name implies, the static trials do not involve moving the MRT train. Instead, the train’s components such as its signalling system, on-board computer, air-conditioning and lights are tested intensively at the depot.

Once these static trials have been completed, new trains will be tested on the CCL test track to be certified safe before they are tested on the line. These test runs are known as dynamic trials. Trains will run without any passengers during off-peak hours. This must be done until the train accumulates at least 1,000km of test runs. As the CCL is about 35.5km, a new train would have to traverse the entire CCL route at least 28.2 times to hit this target. This usually takes several weeks. New trains are cleared for passenger service after they successfully complete every test item that forms part of the dynamic trial.

Even after new trains receive the green light for passenger service, the CCL team keeps a close eye on new trains to rectify any teething issues that may crop up from time to time. This is because even new trains delivered straight from the factory can develop faults due to defective new parts or manufacturing errors.

The SMRT engineering team is working closely with the LTA and train maker Alstom to troubleshoot and resolve issues on the new trains that crop up after the trains start running on the CCL network. In some instances, SMRT’s commitment to passenger safety has resulted in the recall of new trains from trials or passenger service back to the depot. Once at KCD, engineering staff examine these trains closely to get to the root of the problem in partnership with LTA or Alstom.

The CCL team remains committed to high standards of safety, reliability and customer service on Singapore’s first fully underground MRT line. With five new C830 trains presently undergoing trials, the CCL team will have a full fleet of 64 trains for passenger service in time to come.

A sad passing of two colleagues
Scroll to top