You are here: Home1 / Trains2 / Trains Vs Lightning

We spoke to our engineers to understand how our trains are protected from lightning strikes. Each train is protected by a “Faraday Cage”. This is an enclosure formed by conductive material that blocks electric fields and electric currents such as lightning strikes. The cage conducts current around the outside of the enclosed space with none passing through the interior. 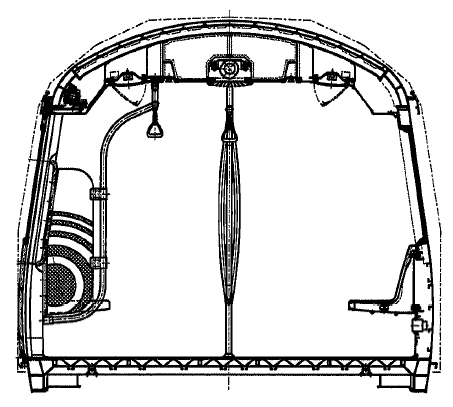 In this case, the metallic exterior of our trains is the Faraday Cage that protects everyone inside from electric currents. Even if you’re holding onto the grab pole, you will still be safe as grab poles are attached securely to the train’s interior and are not connected to the external frame.  If lightning strikes, the electric current will travel through the outside shell of the train, not through the cabin, and pass through the wheels to the track. The train is grounded to the track.

This process of shielding is used in cars and planes as well.

Lightning Strike on 11 May

You may have read on the news that lightning struck a location between Yio Chu Kang and Khatib Stations along the North-South Line on 11 May 2016. This caused a train fault, affecting commuters travelling towards Yio Chu Kang Station. Commuters on board the affected train were safely disembarked at Yio Chu Kang Station. As a precaution, our engineers also tested the trackside equipment to ensure that it was safe for trains to move over the affected area.

Initial findings show no indication that our train was directly struck by lightning. We suspect that lightning could have hit a nearby area close to the train and indirectly affected the performance of electronics on the train which resulted in a train fault.

Lightning related incidents are a relatively rare occurrence. We have had an average of one or two such incidents in recent years. We would like to reassure all our commuters that our trains are designed to safely protect them in adverse weather conditions, such as lightning strikes.